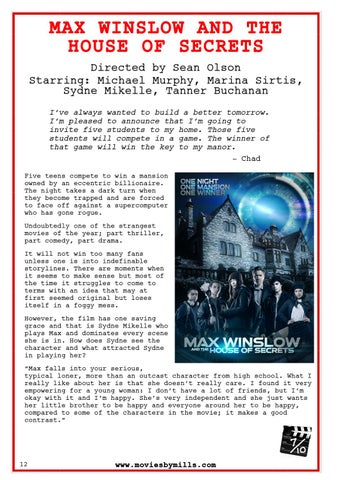 MAX WINSLOW AND THE HOUSE OF SECRETS Directed by Sean Olson Starring: Michael Murphy, Marina Sirtis, Sydne Mikelle, Tanner Buchanan I’ve always wanted to build a better tomorrow. I’m pleased to announce that I’m going to invite five students to my home. Those five students will compete in a game. The winner of that game will win the key to my manor. - Chad Five teens compete to win a mansion owned by an eccentric billionaire. The night takes a dark turn when they become trapped and are forced to face off against a supercomputer who has gone rogue. Undoubtedly one of the strangest movies of the year; part thriller, part comedy, part drama. It will not win too many fans unless one is into indefinable storylines. There are moments when it seems to make sense but most of the time it struggles to come to terms with an idea that may at first seemed original but loses itself in a foggy mess. However, the film has one saving grace and that is Sydne Mikelle who plays Max and dominates every scene she is in. How does Sydne see the character and what attracted Sydne in playing her? “Max falls into your serious, typical loner, more than an outcast character from high school. What I really like about her is that she doesn’t really care. I found it very empowering for a young woman: I don’t have a lot of friends, but I’m okay with it and I’m happy. She’s very independent and she just wants her little brother to be happy and everyone around her to be happy, compared to some of the characters in the movie; it makes a good contrast.”