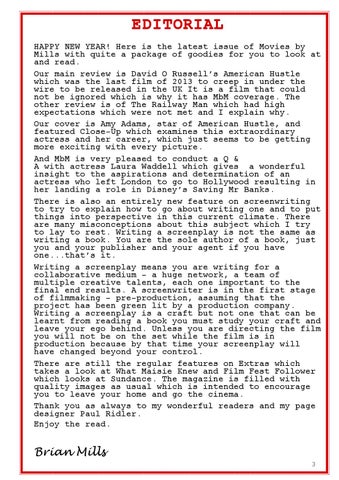 EDITORIAL HAPPY NEW YEAR! Here is the latest issue of Movies by Mills with quite a package of goodies for you to look at and read. Our main review is David O Russell’s American Hustle which was the last film of 2013 to creep in under the wire to be released in the UK It is a film that could not be ignored which is why it has MbM coverage. The other review is of The Railway Man which had high expectations which were not met and I explain why. Our cover is Amy Adams, star of American Hustle, and featured Close-Up which examines this extraordinary actress and her career, which just seems to be getting more exciting with every picture. And MbM is very pleased to conduct a Q &amp; A with actress Laura Waddell which gives a wonderful insight to the aspirations and determination of an actress who left London to go to Hollywood resulting in her landing a role in Disney’s Saving Mr Banks. There is also an entirely new feature on screenwriting to try to explain how to go about writing one and to put things into perspective in this current climate. There are many misconceptions about this subject which I try to lay to rest. Writing a screenplay is not the same as writing a book. You are the sole author of a book, just you and your publisher and your agent if you have one...that’s it. Writing a screenplay means you are writing for a collaborative medium – a huge network, a team of multiple creative talents, each one important to the final end results. A screenwriter is in the first stage of filmmaking – pre-production, assuming that the project has been green lit by a production company. Writing a screenplay is a craft but not one that can be learnt from reading a book you must study your craft and leave your ego behind. Unless you are directing the film you will not be on the set while the film is in production because by that time your screenplay will have changed beyond your control. There are still the regular features on Extras which takes a look at What Maisie Knew and Film Fest Follower which looks at Sundance. The magazine is filled with quality images as usual which is intended to encourage you to leave your home and go the cinema. Thank you as always to my wonderful readers and my page designer Paul Ridler. Enjoy the read.