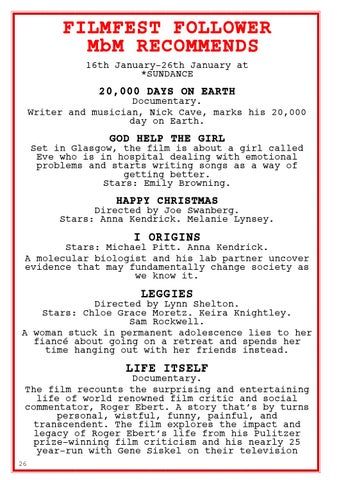 Set in Glasgow, the film is about a girl called Eve who is in hospital dealing with emotional problems and starts writing songs as a way of getting better. Stars: Emily Browning.

I ORIGINS Stars: Michael Pitt. Anna Kendrick. A molecular biologist and his lab partner uncover evidence that may fundamentally change society as we know it.

Directed by Lynn Shelton. Stars: Chloe Grace Moretz. Keira Knightley. Sam Rockwell. A woman stuck in permanent adolescence lies to her fiancé about going on a retreat and spends her time hanging out with her friends instead.

Documentary. The film recounts the surprising and entertaining life of world renowned film critic and social commentator, Roger Ebert. A story that’s by turns personal, wistful, funny, painful, and transcendent. The film explores the impact and legacy of Roger Ebert’s life from his Pulitzer prize-winning film criticism and his nearly 25 year-run with Gene Siskel on their television 26