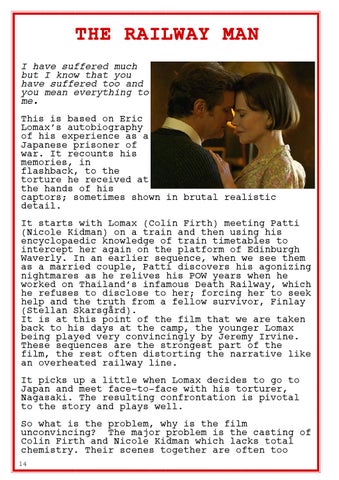 THE RAILWAY MAN I have suffered much but I know that you have suffered too and you mean everything to me. This is based on Eric Lomax’s autobiography of his experience as a Japanese prisoner of war. It recounts his memories, in flashback, to the torture he received at the hands of his captors; sometimes shown in brutal realistic detail. It starts with Lomax (Colin Firth) meeting Patti (Nicole Kidman) on a train and then using his encyclopaedic knowledge of train timetables to intercept her again on the platform of Edinburgh Waverly. In an earlier sequence, when we see them as a married couple, Patti discovers his agonizing nightmares as he relives his POW years when he worked on Thailand’s infamous Death Railway, which he refuses to disclose to her; forcing her to seek help and the truth from a fellow survivor, Finlay (Stellan Skarsgård). It is at this point of the film that we are taken back to his days at the camp, the younger Lomax being played very convincingly by Jeremy Irvine. These sequences are the strongest part of the film, the rest often distorting the narrative like an overheated railway line. It picks up a little when Lomax decides to go to Japan and meet face-to-face with his torturer, Nagasaki. The resulting confrontation is pivotal to the story and plays well. So what is the problem, why is the film unconvincing? The major problem is the casting of Colin Firth and Nicole Kidman which lacks total chemistry. Their scenes together are often too 14