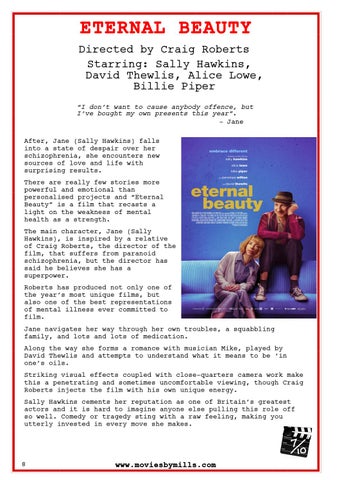 After, Jane (Sally Hawkins) falls into a state of despair over her schizophrenia, she encounters new sources of love and life with surprising results. There are really few stories more powerful and emotional than personalised projects and “Eternal Beauty” is a film that recasts a light on the weakness of mental health as a strength. The main character, Jane (Sally Hawkins), is inspired by a relative of Craig Roberts, the director of the film, that suffers from paranoid schizophrenia, but the director has said he believes she has a superpower. Roberts has produced not only one of the year’s most unique films, but also one of the best representations of mental illness ever committed to film. Jane navigates her way through her own troubles, a squabbling family, and lots and lots of medication.

Along the way she forms a romance with musician Mike, played by David Thewlis and attempts to understand what it means to be ‘in one’s oils. Striking visual effects coupled with close-quarters camera work make this a penetrating and sometimes uncomfortable viewing, though Craig Roberts injects the film with his own unique energy. Sally Hawkins cements her reputation as one of Britain’s greatest actors and it is hard to imagine anyone else pulling this role off so well. Comedy or tragedy sting with a raw feeling, making you utterly invested in every move she makes.