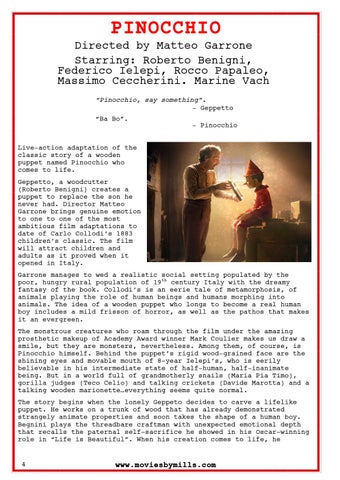 PINOCCHIO Directed by Matteo Garrone Starring: Roberto Benigni, Federico Ielepi, Rocco Papaleo, Massimo Ceccherini. Marine Vach “Pinocchio, say something”. - Geppetto “Ba Bo”. - Pinocchio Live-action adaptation of the classic story of a wooden puppet named Pinocchio who comes to life. Geppetto, a woodcutter (Roberto Benigni) creates a puppet to replace the son he never had. Director Matteo Garrone brings genuine emotion to one to one of the most ambitious film adaptations to date of Carlo Collodi’s 1883 children’s classic. The film will attract children and adults as it proved when it opened in Italy. Garrone manages to wed a realistic social setting populated by the poor, hungry rural population of 19th century Italy with the dreamy fantasy of the book. Collodi’s is an eerie tale of metamorphosis, of animals playing the role of human beings and humans morphing into animals. The idea of a wooden puppet who longs to become a real human boy includes a mild frisson of horror, as well as the pathos that makes it an evergreen. The monstrous creatures who roam through the film under the amazing prosthetic makeup of Academy Award winner Mark Coulier makes us draw a smile, but they are monsters, nevertheless. Among them, of course, is Pinocchio himself. Behind the puppet’s rigid wood-grained face are the shining eyes and movable mouth of 8-year Ielepi’s, who is eerily believable in his intermediate state of half-human, half-inanimate being. But in a world full of grandmotherly snails (Maria Pia Timo), gorilla judges (Teco Celio) and talking crickets (Davide Marotta) and a talking wooden marionette…everything seems quite normal. The story begins when the lonely Geppeto decides to carve a lifelike puppet. He works on a trunk of wood that has already demonstrated strangely animate properties and soon takes the shape of a human boy. Begnini plays the threadbare craftman with unexpected emotional depth that recalls the paternal self-sacrifice he showed in his Oscar-winning role in “Life is Beautiful”. When his creation comes to life, he