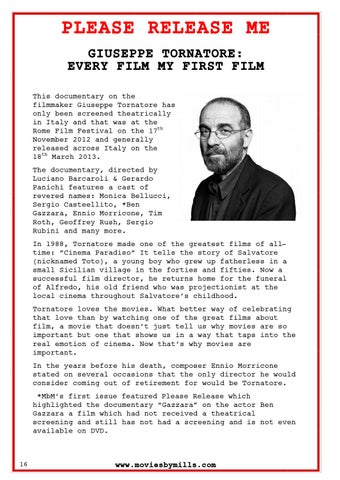 PLEASE RELEASE ME GIUSEPPE TORNATORE: EVERY FILM MY FIRST FILM This documentary on the filmmaker Giuseppe Tornatore has only been screened theatrically in Italy and that was at the Rome Film Festival on the 17th November 2012 and generally released across Italy on the 18th March 2013. The documentary, directed by Luciano Barcaroli & Gerardo Panichi features a cast of revered names: Monica Bellucci, Sergio Casteellito, *Ben Gazzara, Ennio Morricone, Tim Roth, Geoffrey Rush, Sergio Rubini and many more.

In 1988, Tornatore made one of the greatest films of alltime: ”Cinema Paradiso” It tells the story of Salvatore (nicknamed Toto), a young boy who grew up fatherless in a small Sicilian village in the forties and fifties. Now a successful film director, he returns home for the funeral of Alfredo, his old friend who was projectionist at the local cinema throughout Salvatore’s childhood. Tornatore loves the movies. What better way of celebrating that love than by watching one of the great films about film, a movie that doesn’t just tell us why movies are so important but one that shows us in a way that taps into the real emotion of cinema. Now that’s why movies are important. In the years before his death, composer Ennio Morricone stated on several occasions that the only director he would consider coming out of retirement for would be Tornatore. *MbM’s first issue featured Please Release which highlighted the documentary “Gazzara” on the actor Ben Gazzara a film which had not received a theatrical screening and still has not had a screening and is not even available on DVD.