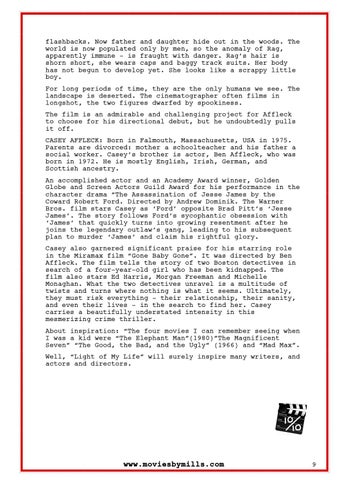 flashbacks. Now father and daughter hide out in the woods. The world is now populated only by men, so the anomaly of Rag, apparently immune – is fraught with danger. Rag’s hair is shorn short, she wears caps and baggy track suits. Her body has not begun to develop yet. She looks like a scrappy little boy. For long periods of time, they are the only humans we see. The landscape is deserted. The cinematographer often films in longshot, the two figures dwarfed by spookiness. The film is an admirable and challenging project for Affleck to choose for his directional debut, but he undoubtedly pulls it off.

CASEY AFFLECK: Born in Falmouth, Massachusetts, USA in 1975. Parents are divorced: mother a schoolteacher and his father a social worker. Casey’s brother is actor, Ben Affleck, who was born in 1972. He is mostly English, Irish, German, and Scottish ancestry. An accomplished actor and an Academy Award winner, Golden Globe and Screen Actors Guild Award for his performance in the character drama “The Assassination of Jesse James by the Coward Robert Ford. Directed by Andrew Dominik. The Warner Bros. film stars Casey as ‘Ford’ opposite Brad Pitt’s ‘Jesse James’. The story follows Ford’s sycophantic obsession with ‘James’ that quickly turns into growing resentment after he joins the legendary outlaw’s gang, leading to his subsequent plan to murder ‘James’ and claim his rightful glory. Casey also garnered significant praise for his starring role in the Miramax film “Gone Baby Gone”. It was directed by Ben Affleck. The film tells the story of two Boston detectives in search of a four-year-old girl who has been kidnapped. The film also stars Ed Harris, Morgan Freeman and Michelle Monaghan. What the two detectives unravel is a multitude of twists and turns where nothing is what it seems. Ultimately, they must risk everything – their relationship, their sanity, and even their lives – in the search to find her. Casey carries a beautifully understated intensity in this mesmerizing crime thriller. About inspiration: “The four movies I can remember seeing when I was a kid were “The Elephant Man”(1980)”The Magnificent Seven” “The Good, the Bad, and the Ugly” (1966) and “Mad Max”. Well, “Light of My Life” will surely inspire many writers, and actors and directors.