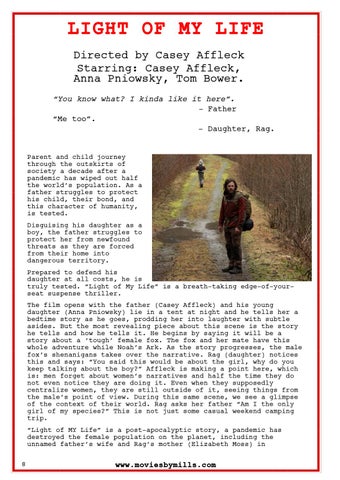 LIGHT OF MY LIFE Directed by Casey Affleck Starring: Casey Affleck, Anna Pniowsky, Tom Bower. “You know what? I kinda like it here”. - Father “Me too”. - Daughter, Rag.

Parent and child journey through the outskirts of society a decade after a pandemic has wiped out half the world’s population. As a father struggles to protect his child, their bond, and this character of humanity, is tested. Disguising his daughter as a boy, the father struggles to protect her from newfound threats as they are forced from their home into dangerous territory. Prepared to defend his daughter at all costs, he is truly tested. “Light of My Life” is a breath-taking edge-of-yourseat suspense thriller. The film opens with the father (Casey Affleck) and his young daughter (Anna Pniowsky) lie in a tent at night and he tells her a bedtime story as he goes, prodding her into laughter with subtle asides. But the most revealing piece about this scene is the story he tells and how he tells it. He begins by saying it will be a story about a ‘tough’ female fox. The fox and her mate have this whole adventure while Noah’s Ark. As the story progresses, the male fox’s shenanigans takes over the narrative. Rag (daughter) notices this and says: “You said this would be about the girl, why do you keep talking about the boy?” Affleck is making a point here, which is: men forget about women’s narratives and half the time they do not even notice they are doing it. Even when they supposedly centralize women, they are still outside of it, seeing things from the male’s point of view. During this same scene, we see a glimpse of the context of their world. Rag asks her father “Am I the only girl of my species?” This is not just some casual weekend camping trip. “Light of MY Life” is a post-apocalyptic story, a pandemic has destroyed the female population on the planet, including the unnamed father’s wife and Rag’s mother (Elizabeth Moss) in 8