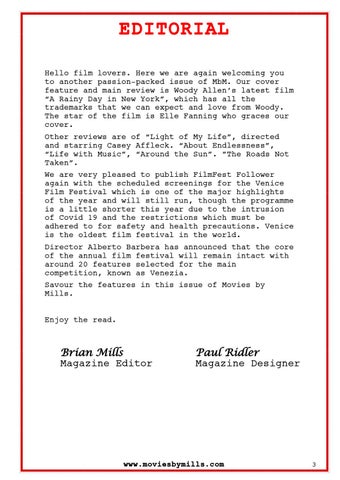 EDITORIAL Hello film lovers. Here we are again welcoming you to another passion-packed issue of MbM. Our cover feature and main review is Woody Allen’s latest film “A Rainy Day in New York”, which has all the trademarks that we can expect and love from Woody. The star of the film is Elle Fanning who graces our cover. Other reviews are of “Light of My Life”, directed and starring Casey Affleck. “About Endlessness”, “Life with Music”, “Around the Sun”. ”The Roads Not Taken”. We are very pleased to publish FilmFest Follower again with the scheduled screenings for the Venice Film Festival which is one of the major highlights of the year and will still run, though the programme is a little shorter this year due to the intrusion of Covid 19 and the restrictions which must be adhered to for safety and health precautions. Venice is the oldest film festival in the world.

Director Alberto Barbera has announced that the core of the annual film festival will remain intact with around 20 features selected for the main competition, known as Venezia. Savour the features in this issue of Movies by Mills. Enjoy the read.