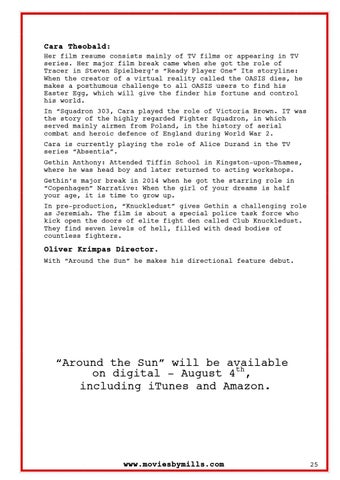 Cara Theobald: Her film resume consists mainly of TV films or appearing in TV series. Her major film break came when she got the role of Tracer in Steven Spielberg’s “Ready Player One” Its storyline: When the creator of a virtual reality called the OASIS dies, he makes a posthumous challenge to all OASIS users to find his Easter Egg, which will give the finder his fortune and control his world. In “Squadron 303, Cara played the role of Victoria Brown. IT was the story of the highly regarded Fighter Squadron, in which served mainly airmen from Poland, in the history of aerial combat and heroic defence of England during World War 2.

Cara is currently playing the role of Alice Durand in the TV series “Absentia”. Gethin Anthony: Attended Tiffin School in Kingston-upon-Thames, where he was head boy and later returned to acting workshops. Gethin’s major break in 2014 when he got the starring role in “Copenhagen” Narrative: When the girl of your dreams is half your age, it is time to grow up. In pre-production, “Knuckledust” gives Gethin a challenging role as Jeremiah. The film is about a special police task force who kick open the doors of elite fight den called Club Knuckledust. They find seven levels of hell, filled with dead bodies of countless fighters.

Oliver Krimpas Director. With “Around the Sun” he makes his directional feature debut.

“Around the Sun” will be available on digital - August 4th, including iTunes and Amazon.