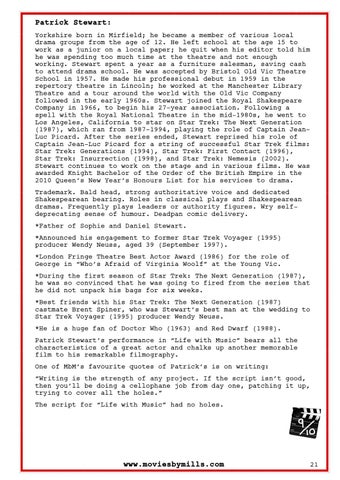 Patrick Stewart: Yorkshire born in Mirfield; he became a member of various local drama groups from the age of 12. He left school at the age 15 to work as a junior on a local paper; he quit when his editor told him he was spending too much time at the theatre and not enough working. Stewart spent a year as a furniture salesman, saving cash to attend drama school. He was accepted by Bristol Old Vic Theatre School in 1957. He made his professional debut in 1959 in the repertory theatre in Lincoln; he worked at the Manchester Library Theatre and a tour around the world with the Old Vic Company followed in the early 1960s. Stewart joined the Royal Shakespeare Company in 1966, to begin his 27-year association. Following a spell with the Royal National Theatre in the mid-1980s, he went to Los Angeles, California to star on Star Trek: The Next Generation (1987), which ran from 1987-1994, playing the role of Captain JeanLuc Picard. After the series ended, Stewart reprised his role of Captain Jean-Luc Picard for a string of successful Star Trek films: Star Trek: Generations (1994), Star Trek: First Contact (1996), Star Trek: Insurrection (1998), and Star Trek: Nemesis (2002). Stewart continues to work on the stage and in various films. He was awarded Knight Bachelor of the Order of the British Empire in the 2010 Queen’s New Year’s Honours List for his services to drama. Trademark. Bald head, strong authoritative voice and dedicated Shakespearean bearing. Roles in classical plays and Shakespearean dramas. Frequently plays leaders or authority figures. Wry selfdeprecating sense of humour. Deadpan comic delivery. *Father of Sophie and Daniel Stewart. *Announced his engagement to former Star Trek Voyager (1995) producer Wendy Neuss, aged 39 (September 1997). *London Fringe Theatre Best Actor Award (1986) for the role of George in “Who’s Afraid of Virginia Woolf” at the Young Vic. *During the first season of Star Trek: The Next Generation (1987), he was so convinced that he was going to fired from the series that he did not unpack his bags for six weeks. *Best friends with his Star Trek: The Next Generation (1987) castmate Brent Spiner, who was Stewart’s best man at the wedding to Star Trek Voyager (1995) producer Wendy Neuss. *He is a huge fan of Doctor Who (1963) and Red Dwarf (1988). Patrick Stewart’s performance in “Life with Music” bears all the characteristics of a great actor and chalks up another memorable film to his remarkable filmography. One of MbM’s favourite quotes of Patrick’s is on writing: “Writing is the strength of any project. If the script isn’t good, then you’ll be doing a cellophane job from day one, patching it up, trying to cover all the holes.” The script for “Life with Music” had no holes.