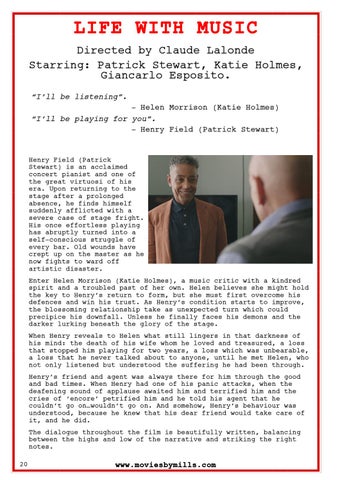 Henry Field (Patrick Stewart) is an acclaimed concert pianist and one of the great virtuosi of his era. Upon returning to the stage after a prolonged absence, he finds himself suddenly afflicted with a severe case of stage fright. His once effortless playing has abruptly turned into a self-conscious struggle of every bar. Old wounds have crept up on the master as he now fights to ward off artistic disaster. Enter Helen Morrison (Katie Holmes), a music critic with a kindred spirit and a troubled past of her own. Helen believes she might hold the key to Henry’s return to form, but she must first overcome his defences and win his trust. As Henry’s condition starts to improve, the blossoming relationship take as unexpected turn which could precipice his downfall. Unless he finally faces his demons and the darker lurking beneath the glory of the stage. When Henry reveals to Helen what still lingers in that darkness of his mind: the death of his wife whom he loved and treasured, a loss that stopped him playing for two years, a loss which was unbearable, a loss that he never talked about to anyone, until he met Helen, who not only listened but understood the suffering he had been through. Henry’s friend and agent was always there for him through the good and bad times. When Henry had one of his panic attacks, when the deafening sound of applause awaited him and terrified him and the cries of ‘encore’ petrified him and he told his agent that he couldn’t go on…wouldn’t go on. And somehow, Henry’s behaviour was understood, because he knew that his dear friend would take care of it, and he did. The dialogue throughout the film is beautifully written, balancing between the highs and low of the narrative and striking the right notes. 20