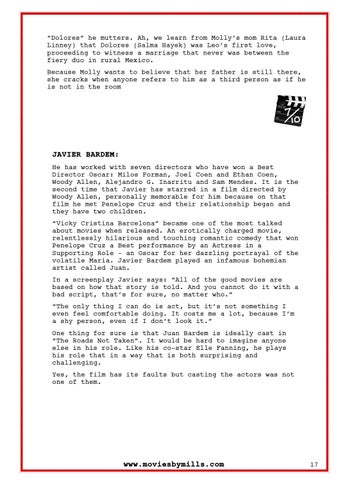 “Dolores” he mutters. Ah, we learn from Molly’s mom Rita (Laura Linney) that Dolores (Salma Hayek) was Leo’s first love, proceeding to witness a marriage that never was between the fiery duo in rural Mexico. Because Molly wants to believe that her father is still there, she cracks when anyone refers to him as a third person as if he is not in the room

JAVIER BARDEM: He has worked with seven directors who have won a Best Director Oscar: Milos Forman, Joel Coen and Ethan Coen, Woody Allen, Alejandro G. Inarritu and Sam Mendes. It is the second time that Javier has starred in a film directed by Woody Allen, personally memorable for him because on that film he met Penelope Cruz and their relationship began and they have two children. “Vicky Cristina Barcelona” became one of the most talked about movies when released. An erotically charged movie, relentlessly hilarious and touching romantic comedy that won Penelope Cruz a Best performance by an Actress in a Supporting Role – an Oscar for her dazzling portrayal of the volatile Maria. Javier Bardem played an infamous bohemian artist called Juan. In a screenplay Javier says: “All of the good movies are based on how that story is told. And you cannot do it with a bad script, that’s for sure, no matter who.” “The only thing I can do is act, but it’s not something I even feel comfortable doing. It costs me a lot, because I’m a shy person, even if I don’t look it.” One thing for sure is that Juan Bardem is ideally cast in “The Roads Not Taken”. It would be hard to imagine anyone else in his role. Like his co-star Elle Fanning, he plays his role that in a way that is both surprising and challenging. Yes, the film has its faults but casting the actors was not one of them.