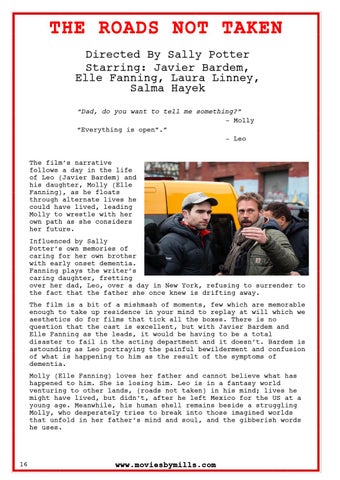 THE ROADS NOT TAKEN Directed By Sally Potter Starring: Javier Bardem, Elle Fanning, Laura Linney, Salma Hayek “Dad, do you want to tell me something?” - Molly “Everything is open”.” - Leo

The film’s narrative follows a day in the life of Leo (Javier Bardem) and his daughter, Molly (Elle Fanning), as he floats through alternate lives he could have lived, leading Molly to wrestle with her own path as she considers her future.

Influenced by Sally Potter’s own memories of caring for her own brother with early onset dementia. Fanning plays the writer’s caring daughter, fretting over her dad, Leo, over a day in New York, refusing to surrender to the fact that the father she once knew is drifting away. The film is a bit of a mishmash of moments, few which are memorable enough to take up residence in your mind to replay at will which we aesthetics do for films that tick all the boxes. There is no question that the cast is excellent, but with Javier Bardem and Elle Fanning as the leads, it would be having to be a total disaster to fail in the acting department and it doesn’t. Bardem is astounding as Leo portraying the painful bewilderment and confusion of what is happening to him as the result of the symptoms of dementia. Molly (Elle Fanning) loves her father and cannot believe what has happened to him. She is losing him. Leo is in a fantasy world venturing to other lands, (roads not taken) in his mind; lives he might have lived, but didn’t, after he left Mexico for the US at a young age. Meanwhile, his human shell remains beside a struggling Molly, who desperately tries to break into those imagined worlds that unfold in her father’s mind and soul, and the gibberish words he uses.