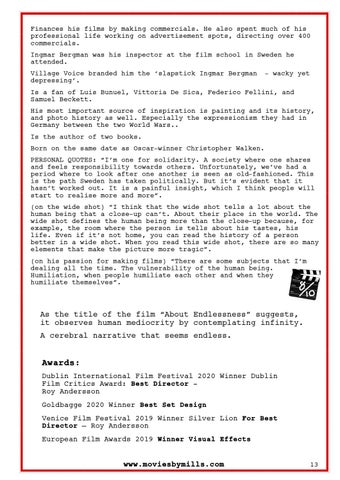 Finances his films by making commercials. He also spent much of his professional life working on advertisement spots, directing over 400 commercials. Ingmar Bergman was his inspector at the film school in Sweden he attended. Village Voice branded him the ‘slapstick Ingmar Bergman depressing’.

Is a fan of Luis Bunuel, Vittoria De Sica, Federico Fellini, and Samuel Beckett. His most important source of inspiration is painting and its history, and photo history as well. Especially the expressionism they had in Germany between the two World Wars.. Is the author of two books. Born on the same date as Oscar-winner Christopher Walken. PERSONAL QUOTES: “I’m one for solidarity. A society where one shares and feels responsibility towards others. Unfortunately, we’ve had a period where to look after one another is seen as old-fashioned. This is the path Sweden has taken politically. But it’s evident that it hasn’t worked out. It is a painful insight, which I think people will start to realise more and more”. (on the wide shot) “I think that the wide shot tells a lot about the human being that a close-up can’t. About their place in the world. The wide shot defines the human being more than the close-up because, for example, the room where the person is tells about his tastes, his life. Even if it’s not home, you can read the history of a person better in a wide shot. When you read this wide shot, there are so many elements that make the picture more tragic”. (on his passion for making films) “There are some subjects that I’m dealing all the time. The vulnerability of the human being. Humiliation, when people humiliate each other and when they humiliate themselves”.

As the title of the film “About Endlessness” suggests, it observes human mediocrity by contemplating infinity. A cerebral narrative that seems endless.