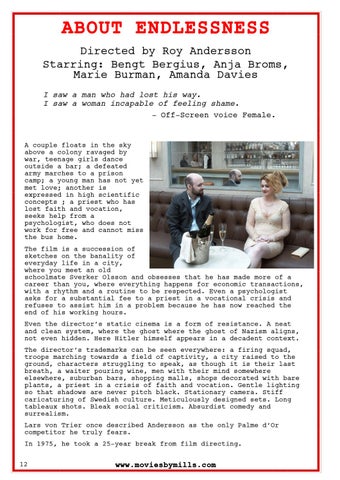 A couple floats in the sky above a colony ravaged by war, teenage girls dance outside a bar; a defeated army marches to a prison camp; a young man has not yet met love; another is expressed in high scientific concepts ; a priest who has lost faith and vocation, seeks help from a psychologist, who does not work for free and cannot miss the bus home. The film is a succession of sketches on the banality of everyday life in a city, where you meet an old schoolmate Sverker Olsson and obsesses that he has made more of a career than you, where everything happens for economic transactions, with a rhythm and a routine to be respected. Even a psychologist asks for a substantial fee to a priest in a vocational crisis and refuses to assist him in a problem because he has now reached the end of his working hours. Even the director’s static cinema is a form of resistance. A neat and clean system, where the ghost where the ghost of Nazism aligns, not even hidden. Here Hitler himself appears in a decadent context. The director’s trademarks can be seen everywhere: a firing squad, troops marching towards a field of captivity, a city raised to the ground, characters struggling to speak, as though it is their last breath, a waiter pouring wine, men with their mind somewhere elsewhere, suburban bars, shopping malls, shops decorated with bare plants, a priest in a crisis of faith and vocation. Gentle lighting so that shadows are never pitch black. Stationary camera. Stiff caricaturing of Swedish culture. Meticulously designed sets. Long tableaux shots. Bleak social criticism. Absurdist comedy and surrealism. Lars von Trier once described Andersson as the only Palme d’Or competitor he truly fears. In 1975, he took a 25-year break from film directing. 12