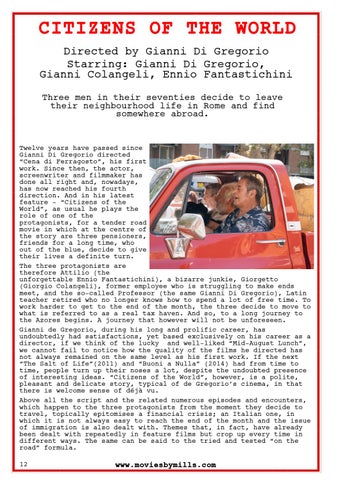 Twelve years have passed since Gianni Di Gregorio directed “Cena di Ferragosto”, his first work. Since then, the actor, screenwriter and filmmaker has done all right and, nowadays, has now reached his fourth direction. And in his latest feature – “Citizens of the World”, as usual he plays the role of one of the protagonists, for a tender road movie in which at the centre of the story are three pensioners, friends for a long time, who out of the blue, decide to give their lives a definite turn. The three protagonists are therefore Attilio (the unforgettable Ennio Fantastichini), a bizarre junkie, Giorgetto (Giorgio Colangeli), former employee who is struggling to make ends meet, and the so-called Professor (the same Gianni Di Gregorio), Latin teacher retired who no longer knows how to spend a lot of free time. To work harder to get to the end of the month, the three decide to move to what is referred to as a real tax haven. And so, to a long journey to the Azores begins. A journey that however will not be unforeseen. Gianni de Gregorio, during his long and prolific career, has undoubtedly had satisfactions, yet based exclusively on his career as a director, if we think of the lucky and well-liked “Mid-August Lunch”, we cannot fail to notice how the quality of the films he directed has not always remained on the same level as his first work. If the next “The Salt of Life”(2011) and “Buoni a Nulla” (2014) had from time to time, people turn up their noses a lot, despite the undoubted presence of interesting ideas. “Citizens of the World”, however, is a polite, pleasant and delicate story, typical of de Gregorio’s cinema, in that there is welcome sense of déjà vu. Above all the script and the related numerous episodes and encounters, which happen to the three protagonists from the moment they decide to travel, topically epitomises a financial crisis; an Italian one, in which it is not always easy to reach the end of the month and the issue of immigration is also dealt with. Themes that, in fact, have already been dealt with repeatedly in feature films but crop up every time in different ways. The same can be said to the tried and tested “on the road” formula. 12