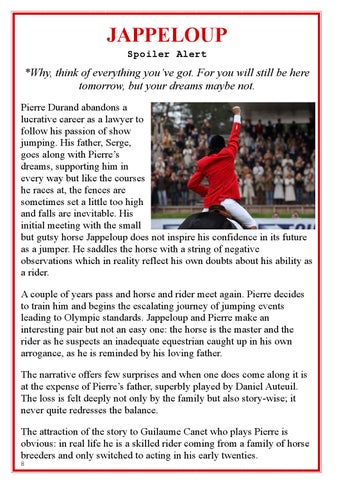 *Why, think of everything you’ve got. For you will still be here tomorrow, but your dreams maybe not. Pierre Durand abandons a lucrative career as a lawyer to follow his passion of show jumping. His father, Serge, goes along with Pierre’s dreams, supporting him in every way but like the courses he races at, the fences are sometimes set a little too high and falls are inevitable. His initial meeting with the small but gutsy horse Jappeloup does not inspire his confidence in its future as a jumper. He saddles the horse with a string of negative observations which in reality reflect his own doubts about his ability as a rider. A couple of years pass and horse and rider meet again. Pierre decides to train him and begins the escalating journey of jumping events leading to Olympic standards. Jappeloup and Pierre make an interesting pair but not an easy one: the horse is the master and the rider as he suspects an inadequate equestrian caught up in his own arrogance, as he is reminded by his loving father. The narrative offers few surprises and when one does come along it is at the expense of Pierre’s father, superbly played by Daniel Auteuil. The loss is felt deeply not only by the family but also story-wise; it never quite redresses the balance. The attraction of the story to Guilaume Canet who plays Pierre is obvious: in real life he is a skilled rider coming from a family of horse breeders and only switched to acting in his early twenties. 8