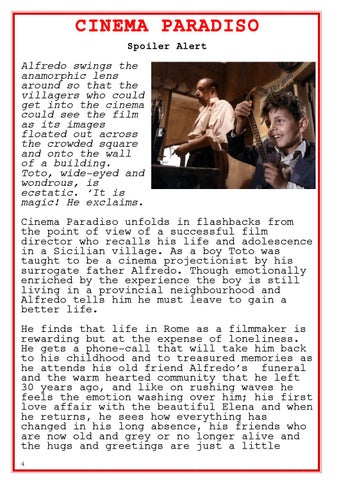 Alfredo swings the anamorphic lens around so that the villagers who could get into the cinema could see the film as its images floated out across the crowded square and onto the wall of a building. Toto, wide-eyed and wondrous, is ecstatic. â&amp;#x20AC;&amp;#x2DC;It is magic! He exclaims. Cinema Paradiso unfolds in flashbacks from the point of view of a successful film director who recalls his life and adolescence in a Sicilian village. As a boy Toto was taught to be a cinema projectionist by his surrogate father Alfredo. Though emotionally enriched by the experience the boy is still living in a provincial neighbourhood and Alfredo tells him he must leave to gain a better life. He finds that life in Rome as a filmmaker is rewarding but at the expense of loneliness. He gets a phone-call that will take him back to his childhood and to treasured memories as he attends his old friend Alfredoâ&amp;#x20AC;&amp;#x2122;s funeral and the warm hearted community that he left 30 years ago, and like on rushing waves he feels the emotion washing over him; his first love affair with the beautiful Elena and when he returns, he sees how everything has changed in his long absence, his friends who are now old and grey or no longer alive and the hugs and greetings are just a little 4