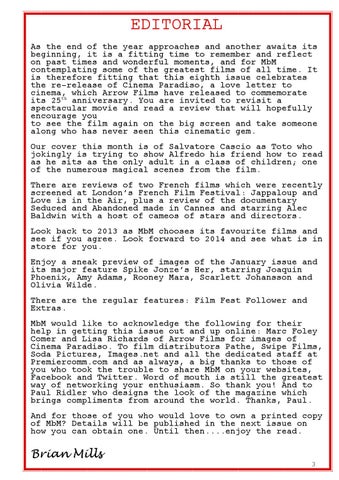 EDITORIAL As the end of the year approaches and another awaits its beginning, it is a fitting time to remember and reflect on past times and wonderful moments, and for MbM contemplating some of the greatest films of all time. It is therefore fitting that this eighth issue celebrates the re-release of Cinema Paradiso, a love letter to cinema, which Arrow Films have released to commemorate its 25th anniversary. You are invited to revisit a spectacular movie and read a review that will hopefully encourage you to see the film again on the big screen and take someone along who has never seen this cinematic gem. Our cover this month is of Salvatore Cascio as Toto who jokingly is trying to show Alfredo his friend how to read as he sits as the only adult in a class of children; one of the numerous magical scenes from the film. There are reviews of two French films which were recently screened at Londonâ&amp;#x20AC;&amp;#x2122;s French Film Festival: Jappaloup and Love is in the Air, plus a review of the documentary Seduced and Abandoned made in Cannes and starring Alec Baldwin with a host of cameos of stars and directors. Look back to 2013 as MbM chooses its favourite films and see if you agree. Look forward to 2014 and see what is in store for you. Enjoy a sneak preview of images of the January issue and its major feature Spike Jonzeâ&amp;#x20AC;&amp;#x2122;s Her, starring Joaquin Phoenix, Amy Adams, Rooney Mara, Scarlett Johansson and Olivia Wilde. There are the regular features: Film Fest Follower and Extras. MbM would like to acknowledge the following for their help in getting this issue out and up online: Marc Foley Comer and Lisa Richards of Arrow Films for images of Cinema Paradiso. To film distributors Pathe, Swipe Films, Soda Pictures, Images.net and all the dedicated staff at Premiercomm.com and as always, a big thanks to those of you who took the trouble to share MbM on your websites, Facebook and Twitter. Word of mouth is still the greatest way of networking your enthusiasm. So thank you! And to Paul Ridler who designs the look of the magazine which brings compliments from around the world. Thanks, Paul. And for those of you who would love to own a printed copy of MbM? Details will be published in the next issue on how you can obtain one. Until then....enjoy the read.