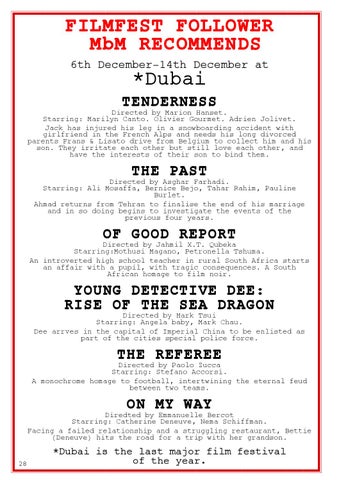 *Dubai TENDERNESS Directed by Marion Hanset. Starring: Marilyn Canto. Olivier Gourmet. Adrien Jolivet. Jack has injured his leg in a snowboarding accident with girlfriend in the French Alps and needs his long divorced parents Frans &amp; Lisato drive from Belgium to collect him and his son. They irritate each other but still love each other, and have the interests of their son to bind them.

THE PAST Directed by Asghar Farhadi. Starring: Ali Mosaffa, Bernice Bejo, Tahar Rahim, Pauline Burlet. Ahmad returns from Tehran to finalise the end of his marriage and in so doing begins to investigate the events of the previous four years.

Directed by Hark Tsui Starring: Angela baby, Mark Chau. Dee arrves in the capital of Imperial China to be enlisted as part of the cities special police force.

ON MY WAY Diredted by Emmanuelle Bercot Starring: Catherine Deneuve, Nema Schiffman. Facing a failed relationship and a struggling restaurant, Bettie (Deneuve) hits the road for a trip with her grandson.

*Dubai is the last major film festival of the year.