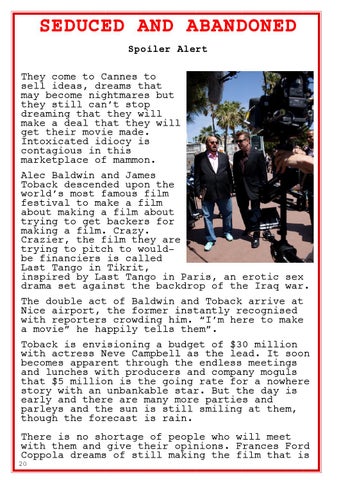 SEDUCED AND ABANDONED Spoiler Alert They come to Cannes to sell ideas, dreams that may become nightmares but they still can’t stop dreaming that they will make a deal that they will get their movie made. Intoxicated idiocy is contagious in this marketplace of mammon. Alec Baldwin and James Toback descended upon the world’s most famous film festival to make a film about making a film about trying to get backers for making a film. Crazy. Crazier, the film they are trying to pitch to wouldbe financiers is called Last Tango in Tikrit, inspired by Last Tango in Paris, an erotic sex drama set against the backdrop of the Iraq war. The double act of Baldwin and Toback arrive at Nice airport, the former instantly recognised with reporters crowding him. “I’m here to make a movie” he happily tells them”. Toback is envisioning a budget of $30 million with actress Neve Campbell as the lead. It soon becomes apparent through the endless meetings and lunches with producers and company moguls that $5 million is the going rate for a nowhere story with an unbankable star. But the day is early and there are many more parties and parleys and the sun is still smiling at them, though the forecast is rain. There is no shortage of people who will meet with them and give their opinions. Frances Ford Coppola dreams of still making the film that is 20