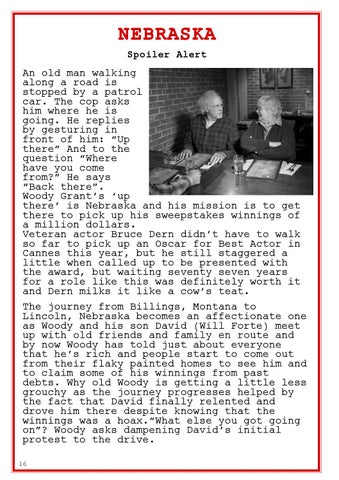 An old man walking along a road is stopped by a patrol car. The cop asks him where he is going. He replies by gesturing in front of him: “Up there” And to the question “Where have you come from?” He says “Back there”. Woody Grant’s ‘up there’ is Nebraska and his mission is to get there to pick up his sweepstakes winnings of a million dollars. Veteran actor Bruce Dern didn’t have to walk so far to pick up an Oscar for Best Actor in Cannes this year, but he still staggered a little when called up to be presented with the award, but waiting seventy seven years for a role like this was definitely worth it and Dern milks it like a cow’s teat. The journey from Billings, Montana to Lincoln, Nebraska becomes an affectionate one as Woody and his son David (Will Forte) meet up with old friends and family en route and by now Woody has told just about everyone that he’s rich and people start to come out from their flaky painted homes to see him and to claim some of his winnings from past debts. Why old Woody is getting a little less grouchy as the journey progresses helped by the fact that David finally relented and drove him there despite knowing that the winnings was a hoax.“What else you got going on”? Woody asks dampening David’s initial protest to the drive. 16