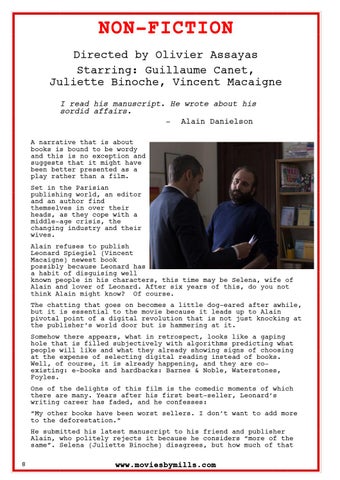 NON-FICTION Directed by Olivier Assayas Starring: Guillaume Canet, Juliette Binoche, Vincent Macaigne I read his manuscript. He wrote about his sordid affairs. - Alain Danielson A narrative that is about books is bound to be wordy and this is no exception and suggests that it might have been better presented as a play rather than a film. Set in the Parisian publishing world, an editor and an author find themselves in over their heads, as they cope with a middle-age crisis, the changing industry and their wives. Alain refuses to publish Leonard Spiegiel (Vincent Macaigne) newest book possibly because Leonard has a habit of disguising well known people in his characters, this time may be Selena, wife of Alain and lover of Leonard. After six years of this, do you not think Alain might know? Of course. The chatting that goes on becomes a little dog-eared after awhile, but it is essential to the movie because it leads up to Alain pivotal point of a digital revolution that is not just knocking at the publisher’s world door but is hammering at it. Somehow there appears, what in retrospect, looks like a gaping hole that is filled subjectively with algorithms predicting what people will like and what they already showing signs of choosing at the expense of selecting digital reading instead of books. Well, of course, it is already happening, and they are coexisting: e-books and hardbacks: Barnes & Noble, Waterstones, Foyles. One of the delights of this film is the comedic moments of which there are many. Years after his first best-seller, Leonard’s writing career has faded, and he confesses: “My other books have been worst sellers. I don’t want to add more to the deforestation.” He submitted his latest manuscript to his friend and publisher Alain, who politely rejects it because he considers “more of the same”. Selena (Juliette Binoche) disagrees, but how much of that 8