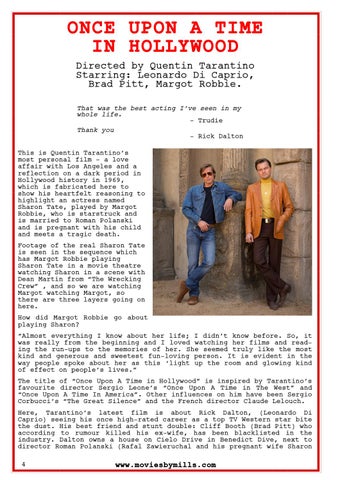 ONCE UPON A TIME IN HOLLYWOOD Directed by Quentin Tarantino Starring: Leonardo Di Caprio, Brad Pitt, Margot Robbie. That was the best acting I’ve seen in my whole life. - Trudie Thank you - Rick Dalton This is Quentin Tarantino’s most personal film – a love affair with Los Angeles and a reflection on a dark period in Hollywood history in 1969, which is fabricated here to show his heartfelt reasoning to highlight an actress named Sharon Tate, played by Margot Robbie, who is starstruck and is married to Roman Polanski and is pregnant with his child and meets a tragic death. Footage of the real Sharon Tate is seen in the sequence which has Margot Robbie playing Sharon Tate in a movie theatre watching Sharon in a scene with Dean Martin from “The Wrecking Crew” , and so we are watching Margot watching Margot, so there are three layers going on here. How did Margot Robbie go about playing Sharon? “Almost everything I know about her life; I didn’t know before. So, it was really from the beginning and I loved watching her films and reading the run-ups to the memories of her. She seemed truly like the most kind and generous and sweetest fun-loving person. It is evident in the way people spoke about her as this ‘light up the room and glowing kind of effect on people’s lives.” The title of “Once Upon A Time in Hollywood” is inspired by Tarantino’s favourite director Sergio Leone’s “Once Upon A Time in The West” and “Once Upon A Time In America”. Other influences on him have been Sergio Corbucci’s “The Great Silence” and the French director Claude Lelouch. Here, Tarantino’s latest film is about Rick Dalton, (Leonardo Di Caprio) seeing his once high-rated career as a top TV Western star bite the dust. His best friend and stunt double: Cliff Booth (Brad Pitt) who according to rumour killed his ex-wife, has been blacklisted in the industry. Dalton owns a house on Cielo Drive in Benedict Dive, next to director Roman Polanski (Rafal Zawieruchal and his pregnant wife Sharon 4