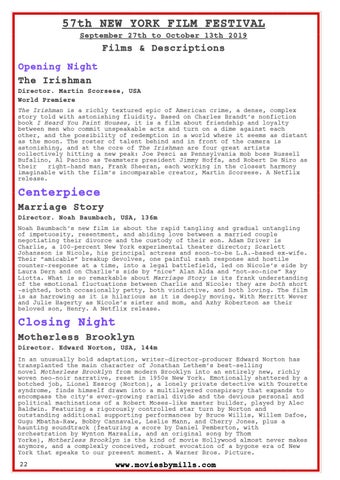 Films & Descriptions Opening Night The Irishman Director. Martin Scorsese, USA World Premiere The Irishman is a richly textured epic of American crime, a dense, complex story told with astonishing fluidity. Based on Charles Brandt’s nonfiction book I Heard You Paint Houses, it is a film about friendship and loyalty between men who commit unspeakable acts and turn on a dime against each other, and the possibility of redemption in a world where it seems as distant as the moon. The roster of talent behind and in front of the camera is astonishing, and at the core of The Irishman are four great artists collectively hitting a new peak: Joe Pesci as Pennsylvania mob boss Russell Bufalino, Al Pacino as Teamsters president Jimmy Hoffa, and Robert De Niro as their right-hand man, Frank Sheeran, each working in the closest harmony imaginable with the film’s incomparable creator, Martin Scorsese. A Netflix release.

Centerpiece Marriage Story Director. Noah Baumbach, USA, 136m Noah Baumbach’s new film is about the rapid tangling and gradual untangling of impetuosity, resentment, and abiding love between a married couple negotiating their divorce and the custody of their son. Adam Driver is Charlie, a 100-percent New York experimental theater director; Scarlett Johansson is Nicole, his principal actress and soon-to-be L.A.-based ex-wife. Their “amicable” breakup devolves, one painful rash response and hostile counter-response at a time, into a legal battlefield, led on Nicole’s side by Laura Dern and on Charlie’s side by “nice” Alan Alda and “not-so-nice” Ray Liotta. What is so remarkable about Marriage Story is its frank understanding of the emotional fluctuations between Charlie and Nicole: they are both short -sighted, both occasionally petty, both vindictive, and both loving. The film is as harrowing as it is hilarious as it is deeply moving. With Merritt Wever and Julie Hagerty as Nicole’s sister and mom, and Azhy Robertson as their beloved son, Henry. A Netflix release.