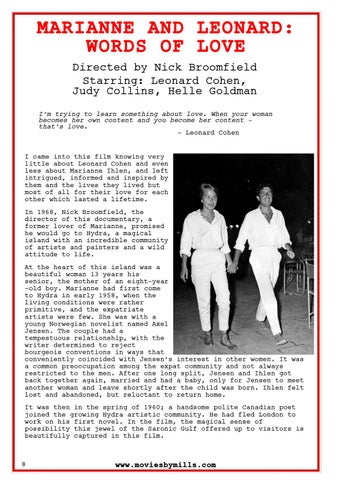 MARIANNE AND LEONARD: WORDS OF LOVE Directed by Nick Broomfield Starring: Leonard Cohen, Judy Collins, Helle Goldman I’m trying to learn something about love. When your woman becomes her own content and you become her content – that’s love. - Leonard Cohen

I came into this film knowing very little about Leonard Cohen and even less about Marianne Ihlen, and left intrigued, informed and inspired by them and the lives they lived but most of all for their love for each other which lasted a lifetime. In 1968, Nick Broomfield, the director of this documentary, a former lover of Marianne, promised he would go to Hydra, a magical island with an incredible community of artists and painters and a wild attitude to life. At the heart of this island was a beautiful woman 13 years his senior, the mother of an eight-year -old boy. Marianne had first come to Hydra in early 1958, when the living conditions were rather primitive, and the expatriate artists were few. She was with a young Norwegian novelist named Axel Jensen. The couple had a tempestuous relationship, with the writer determined to reject bourgeois conventions in ways that conveniently coincided with Jensen’s interest in other women. It was a common preoccupation among the expat community and not always restricted to the men. After one long split, Jensen and Ihlen got back together again, married and had a baby, only for Jensen to meet another woman and leave shortly after the child was born. Ihlen felt lost and abandoned, but reluctant to return home. It was then in the spring of 1960; a handsome polite Canadian poet joined the growing Hydra artistic community. He had fled London to work on his first novel. In the film, the magical sense of possibility this jewel of the Saronic Gulf offered up to visitors is beautifully captured in this film.