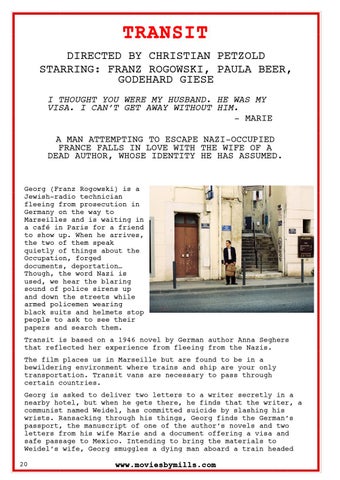 TRANSIT DIRECTED BY CHRISTIAN PETZOLD STARRING: FRANZ ROGOWSKI, PAULA BEER, GODEHARD GIESE I THOUGHT YOU WERE MY HUSBAND. HE WAS MY VISA. I CAN’T GET AWAY WITHOUT HIM. - MARIE

A MAN ATTEMPTING TO ESCAPE NAZI-OCCUPIED FRANCE FALLS IN LOVE WITH THE WIFE OF A DEAD AUTHOR, WHOSE IDENTITY HE HAS ASSUMED.

Georg (Franz Rogowski) is a Jewish-radio technician fleeing from prosecution in Germany on the way to Marseilles and is waiting in a café in Paris for a friend to show up. When he arrives, the two of them speak quietly of things about the Occupation, forged documents, deportation… Though, the word Nazi is used, we hear the blaring sound of police sirens up and down the streets while armed policemen wearing black suits and helmets stop people to ask to see their papers and search them.

Transit is based on a 1946 novel by German author Anna Seghers that reflected her experience from fleeing from the Nazis. The film places us in Marseille but are found to be in a bewildering environment where trains and ship are your only transportation. Transit vans are necessary to pass through certain countries. Georg is asked to deliver two letters to a writer secretly in a nearby hotel, but when he gets there, he finds that the writer, a communist named Weidel, has committed suicide by slashing his wrists. Ransacking through his things, Georg finds the German’s passport, the manuscript of one of the author’s novels and two letters from his wife Marie and a document offering a visa and safe passage to Mexico. Intending to bring the materials to Weidel’s wife, Georg smuggles a dying man aboard a train headed 20