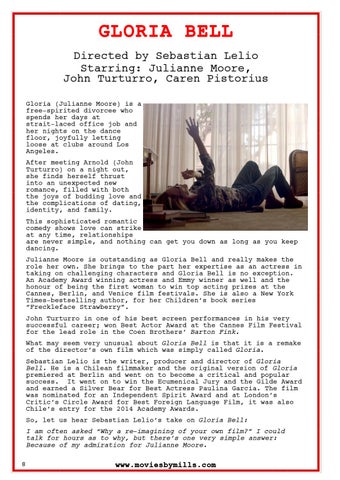 GLORIA BELL Directed by Sebastian Lelio Starring: Julianne Moore, John Turturro, Caren Pistorius Gloria (Julianne Moore) is a free-spirited divorcee who spends her days at strait-laced office job and her nights on the dance floor, joyfully letting loose at clubs around Los Angeles. After meeting Arnold (John Turturro) on a night out, she finds herself thrust into an unexpected new romance, filled with both the joys of budding love and the complications of dating, identity, and family. This sophisticated romantic comedy shows love can strike at any time, relationships are never simple, and nothing can get you down as long as you keep dancing. Julianne Moore is outstanding as Gloria Bell and really makes the role her own. She brings to the part her expertise as an actress in taking on challenging characters and Gloria Bell is no exception. An Academy Award winning actress and Emmy winner as well and the honour of being the first woman to win top acting prizes at the Cannes, Berlin, and Venice film festivals. She is also a New York Times-bestselling author, for her Children’s book series “Freckleface Strawberry”. John Turturro in one of his best screen performances in his very successful career; won Best Actor Award at the Cannes Film Festival for the lead role in the Coen Brothers’ Barton Fink. What may seem very unusual about Gloria Bell is that it is a remake of the director’s own film which was simply called Gloria. Sebastian Lelio is the writer, producer and director of Gloria Bell. He is a Chilean filmmaker and the original version of Gloria premiered at Berlin and went on to become a critical and popular success. It went on to win the Ecumenical Jury and the Gilde Award and earned a Silver Bear for Best Actress Paulina Garcia. The film was nominated for an Independent Spirit Award and at London’s Critic’s Circle Award for Best Foreign Language Film, it was also Chile’s entry for the 2014 Academy Awards. So, let us hear Sebastian Lelio’s take on Gloria Bell: I am often asked “Why a re-imagining of your own film?” I could talk for hours as to why, but there’s one very simple answer: Because of my admiration for Julianne Moore. 8