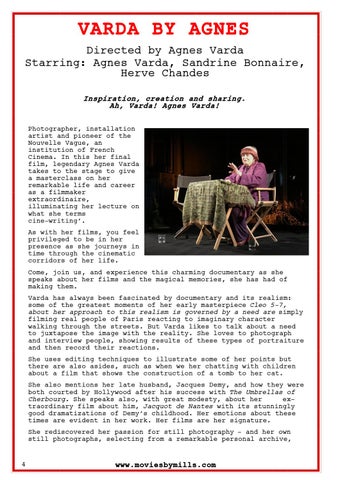 VARDA BY AGNES Directed by Agnes Varda Starring: Agnes Varda, Sandrine Bonnaire, Herve Chandes Inspiration, creation and sharing. Ah, Varda! Agnes Varda! Photographer, installation artist and pioneer of the Nouvelle Vague, an institution of French Cinema. In this her final film, legendary Agnes Varda takes to the stage to give a masterclass on her remarkable life and career as a filmmaker extraordinaire, illuminating her lecture on what she terms cine-writing’. As with her films, you feel privileged to be in her presence as she journeys in time through the cinematic corridors of her life. Come, join us, and experience this charming documentary as she speaks about her films and the magical memories, she has had of making them. Varda has always been fascinated by documentary and its realism: some of the greatest moments of her early masterpiece Cleo 5-7, about her approach to this realism is governed by a need are simply filming real people of Paris reacting to imaginary character walking through the streets. But Varda likes to talk about a need to juxtapose the image with the reality. She loves to photograph and interview people, showing results of these types of portraiture and then record their reactions. She uses editing techniques to illustrate some of her points but there are also asides, such as when we her chatting with children about a film that shows the construction of a tomb to her cat. She also mentions her late husband, Jacques Demy, and how they were both courted by Hollywood after his success with The Umbrellas of Cherbourg. She speaks also, with great modesty, about her extraordinary film about him, Jacquot de Nantes with its stunningly good dramatizations of Demy’s childhood. Her emotions about these times are evident in her work. Her films are her signature. She rediscovered her passion for still photography – and her own still photographs, selecting from a remarkable personal archive,