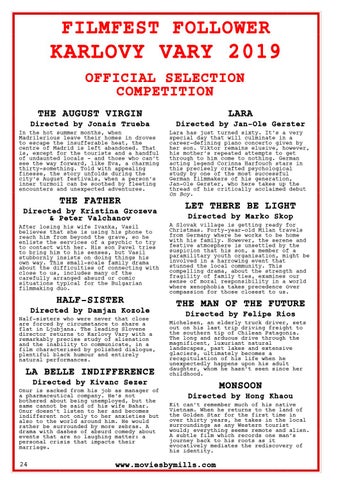 In the hot summer months, when Madrilerious leave their homes in droves to escape the insufferable heat, the centre of Madrid is left abandoned. That is, except for the tourists and a handful of undaunted locals – and those who can’t see the way forward, like Eva, a charming thirty-something. Told with appealing finesse, the story unfolds during the city’s August festivals, when a person’s inner turmoil can be soothed by fleeting encounters and unexpected adventures.

Lara has just turned sixty. It’s a very special day that will culminate in a career-defining piano concerto given by her son. Viktor remains elusive, however, his mother’s repeated attempts to get through to him come to nothing. German acting legend Corinna Harfouch stars in this precisely crafted psychological study by one of the most successful German filmmakers of his generation, Jan-Ole Gerster, who here takes up the thread of his critically acclaimed debut On Boy.

THE FATHER Directed by Kristina Grozeva & Peter Valchanov After losing his wife Ivanka, Vasil believes that she is using his phone to reach him from beyond the grave, so he enlists the services of a psychic to try to contact with her. His son Pavel tries to bring him to his senses, but Vasil stubbornly insists on doing things his own way. This small-scale family drama about the difficulties of connecting with close to us, includes many of the carefully arranged absurd or comic situations typical for the Bulgarian filmmaking duo.

HALF-SISTER Directed by Damjan Kozole Half-sisters who were never that close are forced by circumstance to share a flat in Ljubjana. The leading Slovene director returns to Karlovy Vary with a remarkably precise study of alienation and the inability to communicate, in a film characterised by polished dialogue, plentiful black humour and entirely natural performances.

LET THERE BE LIGHT Directed by Marko Skop A Slovak village is getting ready for Christmas. Forty-year-old Milan travels from Germany where he works to be home with his family. However, the serene and festive atmosphere is unsettled by the suspicion that his son, a member of a paramilitary youth organisation, might be involved in a harrowing event that stunned the local community. This compelling drama, about the strength and fragility of family ties, examines our sense of moral responsibility in a world where xenophobia takes precedence over compassion for those closest to us.

THE MAN OF THE FUTURE Directed by Felipe Rios Michelsen, an elderly truck driver, sets out on his last trip driving freight to the southern tip of Chilean Patagonia. The long and arduous drive through the magnificent, luxuriant natural landscapes, past lakes and extensive glaciers, ultimately becomes a recapitulation of his life when he unexpectedly happens upon his adult daughter, whom he hasn’t seen since her childhood.

Directed by Kivanc Sezer Onur is sacked from his job as manager of a pharmaceutical company. He’s not bothered about being unemployed, but the same cannot be said of his wife Bahar. Onur doesn’t listen to her and becomes indifferent not only to her anxieties but also to the world around him. He would rather be surrounded by more zebras. A drama with dashes of absurd comedy about events that are no laughing matter: a personal crisis that impacts their marriage.

MONSOON Directed by Hong Khaou Kit can’t remember much of his native Vietnam. When he returns to the land of the Golden Star for the first time in over thirty years, he takes in the local surroundings as any Western tourist would; everything seems remote and alien. A subtle film which records one man’s journey back to his roots as it evocatively mediates the rediscovery of his identity.