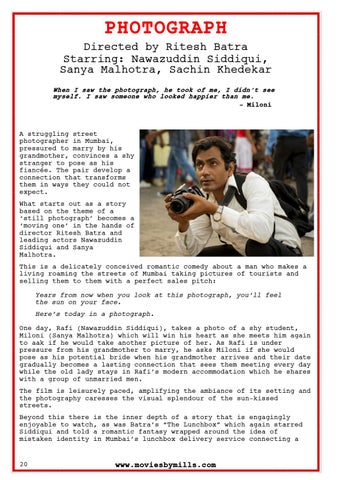 PHOTOGRAPH Directed by Ritesh Batra Starring: Nawazuddin Siddiqui, Sanya Malhotra, Sachin Khedekar When I saw the photograph, he took of me, I didn’t see myself. I saw someone who looked happier than me. - Miloni

A struggling street photographer in Mumbai, pressured to marry by his grandmother, convinces a shy stranger to pose as his fiancée. The pair develop a connection that transforms them in ways they could not expect. What starts out as a story based on the theme of a ‘still photograph’ becomes a ‘moving one’ in the hands of director Ritesh Batra and leading actors Nawazuddin Siddiqui and Sanya Malhotra. This is a delicately conceived romantic comedy about a man who makes a living roaming the streets of Mumbai taking pictures of tourists and selling them to them with a perfect sales pitch: Years from now when you look at this photograph, you’ll feel the sun on your face. Here’s today in a photograph. One day, Rafi (Nawazuddin Siddiqui), takes a photo of a shy student, Miloni (Sanya Malhotra) which will win his heart as she meets him again to aak if he would take another picture of her. As Rafi is under pressure from his grandmother to marry, he asks Miloni if she would pose as his potential bride when his grandmother arrives and their date gradually becomes a lasting connection that sees them meeting every day while the old lady stays in Rafi’s modern accommodation which he shares with a group of unmarried men. The film is leisurely paced, amplifying the ambiance of its setting and the photography caresses the visual splendour of the sun-kissed streets. Beyond this there is the inner depth of a story that is enjoyable to watch, as was Batra’s “The Lunchbox” which Siddiqui and told a romantic fantasy wrapped around the mistaken identity in Mumbai’s lunchbox delivery service