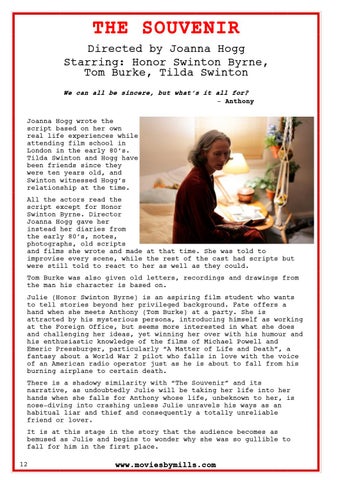 THE SOUVENIR Directed by Joanna Hogg Starring: Honor Swinton Byrne, Tom Burke, Tilda Swinton We can all be sincere, but what’s it all for? - Anthony Joanna Hogg wrote the script based on her own real life experiences while attending film school in London in the early 80’s. Tilda Swinton and Hogg have been friends since they were ten years old, and Swinton witnessed Hogg’s relationship at the time. All the actors read the script except for Honor Swinton Byrne. Director Joanna Hogg gave her instead her diaries from the early 80’s, notes, photographs, old scripts and films she wrote and made at that time. She was told to improvise every scene, while the rest of the cast had scripts but were still told to react to her as well as they could. Tom Burke was also given old letters, recordings and drawings from the man his character is based on. Julie (Honor Swinton Byrne) is an aspiring film student who wants to tell stories beyond her privileged background. Fate offers a hand when she meets Anthony (Tom Burke) at a party. She is attracted by his mysterious persona, introducing himself as working at the Foreign Office, but seems more interested in what she does and challenging her ideas, yet winning her over with his humour and his enthusiastic knowledge of the films of Michael Powell and Emeric Pressburger, particularly “A Matter of Life and Death”, a fantasy about a World War 2 pilot who falls in love with the voice of an American radio operator just as he is about to fall from his burning airplane to certain death. There is a shadowy similarity with “The Souvenir” and its narrative, as undoubtedly Julie will be taking her life into her hands when she falls for Anthony whose life, unbeknown to her, is nose-diving into crashing unless Julie unravels his ways as an habitual liar and thief and consequently a totally unreliable friend or lover. It is at this stage in the story that the audience becomes as bemused as Julie and begins to wonder why she was so gullible to fall for him in the first place. 12