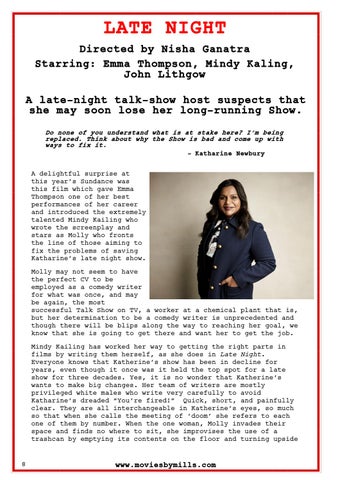 LATE NIGHT Directed by Nisha Ganatra Starring: Emma Thompson, Mindy Kaling, John Lithgow A late-night talk-show host suspects that she may soon lose her long-running Show. Do none of you understand what is at stake here? I’m being replaced. Think about why the Show is bad and come up with ways to fix it. - Katharine Newbury A delightful surprise at this year’s Sundance was this film which gave Emma Thompson one of her best performances of her career and introduced the extremely talented Mindy Kailing who wrote the screenplay and stars as Molly who fronts the line of those aiming to fix the problems of saving Katharine’s late night show. Molly may not seem to have the perfect CV to be employed as a comedy writer for what was once, and may be again, the most successful Talk Show on TV, a worker at a chemical plant that is, but her determination to be a comedy writer is unprecedented and though there will be blips along the way to reaching her goal, we know that she is going to get there and want her to get the job. Mindy Kailing has worked her way to getting the right parts in films by writing them herself, as she does in Late Night. Everyone knows that Katherine’s show has been in decline for years, even though it once was it held the top spot for a late show for three decades. Yes, it is no wonder that Katherine’s wants to make big changes. Her team of writers are mostly privileged white males who write very carefully to avoid Katharine’s dreaded “You’re fired!” Quick, short, and painfully clear. They are all interchangeable in Katherine’s eyes, so much so that when she calls the meeting of ‘doom’ she refers to each one of them by number. When the one woman, Molly invades their space and finds no where to sit, she improvises the use of a trashcan by emptying its contents on the floor and turning upside