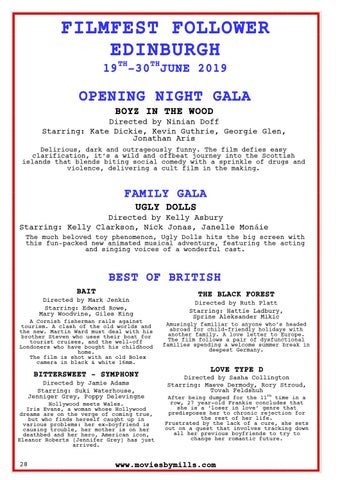 BEST OF BRITISH BAIT Directed by Mark Jenkin Starring: Edward Rowe, Mary Woodvine, Giles King A Cornish fisherman rails against tourism. A clash of the old worlds and the new. Martin Ward must deal with his brother Steven who uses their boat for tourist cruises, and the well-off Londoners who have bought his childhood home. The film is shot with an old Bolex camera in black & white 16mm.

BITTERSWEET – SYMPHONY Directed by Jamie Adams Starring: Suki Waterhouse, Jenniger Grey, Poppy Delevingne Hollywood meets Wales. Iris Evans, a woman whose Hollywood dreams are on the verge of coming true, but who finds herself caught up in various problems: her ex-boyfriend is causing trouble, her mother is on her deathbed and her hero, American icon, Eleanor Roberts (Jennifer Grey) has just arrived.

LOVE TYPE D Directed by Sasha Collington Starring: Maeve Dermody, Rory Stroud, Tovah Feldshuh After being dumped for the 11th time in a row, 27 year-old Frankie concludes that she is a ‘loser in love’ genre that predisposes her to chronic rejection for the rest of her life. Frustrated by the lack of a cure, she sets out on a quest that involves tracking down all her previous boyfriends to try to change her romantic future.