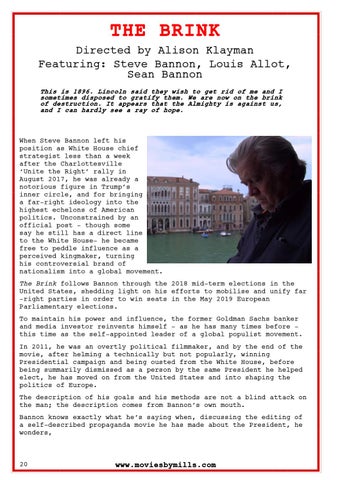 THE BRINK Directed by Alison Klayman Featuring: Steve Bannon, Louis Allot, Sean Bannon This is 1896. Lincoln said they wish to get rid of me and I sometimes disposed to gratify them. We are now on the brink of destruction. It appears that the Almighty is against us, and I can hardly see a ray of hope.

When Steve Bannon left his position as White House chief strategist less than a week after the Charlottesville ‘Unite the Right’ rally in August 2017, he was already a notorious figure in Trump’s inner circle, and for bringing a far-right ideology into the highest echelons of American politics. Unconstrained by an official post – though some say he still has a direct line to the White House- he became free to peddle influence as a perceived kingmaker, turning his controversial brand of nationalism into a global movement. The Brink follows Bannon through the 2018 mid-term elections in the United States, shedding light on his efforts to mobilise and unify far -right parties in order to win seats in the May 2019 European Parliamentary elections. To maintain his power and influence, the former Goldman Sachs banker and media investor reinvents himself – as he has many times before – this time as the self-appointed leader of a global populist movement. In 2011, he was an overtly political filmmaker, and by the end of the movie, after helming a technically but not popularly, winning Presidential campaign and being ousted from the White House, before being summarily dismissed as a person by the same President he helped elect, he has moved on from the United States and into shaping the politics of Europe. The description of his goals and his methods are not a blind attack on the man; the description comes from Bannon’s own mouth. Bannon knows exactly what he’s saying when, discussing the editing of a self-described propaganda movie he has made about the President, he wonders,