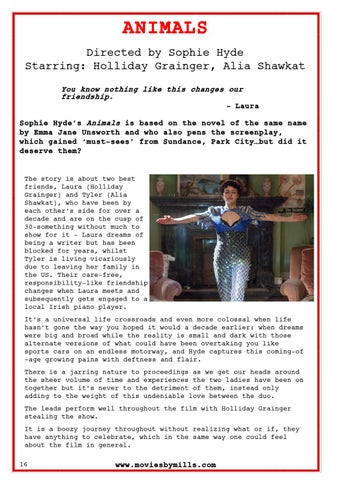 ANIMALS Directed by Sophie Hyde Starring: Holliday Grainger, Alia Shawkat You know nothing like this changes our friendship. - Laura Sophie Hyde’s Animals is based on the novel of the same name by Emma Jane Unsworth and who also pens the screenplay, which gained ‘must-sees’ from Sundance, Park City…but did it deserve them?

The story is about two best friends, Laura (Holliday Grainger) and Tyler (Alia Shawkat), who have been by each other’s side for over a decade and are on the cusp of 30-something without much to show for it – Laura dreams of being a writer but has been blocked for years, whilst Tyler is living vicariously due to leaving her family in the US. Their care-free, responsibility-like friendship changes when Laura meets and subsequently gets engaged to a local Irish piano player. It’s a universal life crossroads and even more colossal when life hasn’t gone the way you hoped it would a decade earlier: when dreams were big and broad while the reality is small and dark with those alternate versions of what could have been overtaking you like sports cars on an endless motorway, and Hyde captures this coming-of -age growing pains with deftness and flair. There is a jarring nature to proceedings as we get our heads around the sheer volume of time and experiences the two ladies have been on together but it’s never to the detriment of them, instead only adding to the weight of this undeniable love between the duo. The leads perform well throughout the film with Holliday Grainger stealing the show. It is a boozy journey throughout without realizing what or if, they have anything to celebrate, which in the same way one could feel about the film in general. 16