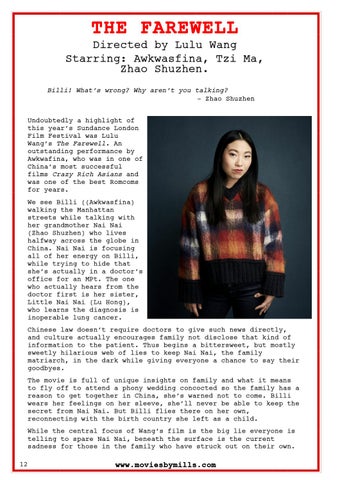 THE FAREWELL Directed by Lulu Wang Starring: Awkwasfina, Tzi Ma, Zhao Shuzhen. Billi! What’s wrong? Why aren’t you talking? - Zhao Shuzhen Undoubtedly a highlight of this year’s Sundance London Film Festival was Lulu Wang’s The Farewell. An outstanding performance by Awkwafina, who was in one of China’s most successful films Crazy Rich Asians and was one of the best Romcoms for years. We see Billi ((Awkwasfina) walking the Manhattan streets while talking with her grandmother Nai Nai (Zhao Shuzhen) who lives halfway across the globe in China. Nai Nai is focusing all of her energy on Billi, while trying to hide that she’s actually in a doctor’s office for an MPt. The one who actually hears from the doctor first is her sister, Little Nai Nai (Lu Hong), who learns the diagnosis is inoperable lung cancer. Chinese law doesn’t require doctors to give such news directly, and culture actually encourages family not disclose that kind of information to the patient. Thus begins a bittersweet, but mostly sweetly hilarious web of lies to keep Nai Nai, the family matriarch, in the dark while giving everyone a chance to say their goodbyes. The movie is full of unique insights on family and what it means to fly off to attend a phony wedding concocted so the family has a reason to get together in China, she’s warned not to come. Billi wears her feelings on her sleeve, she’ll never be able to keep the secret from Nai Nai. But Billi flies there on her own, reconnecting with the birth country she left as a child. While the central focus of Wang’s film is the big lie everyone is telling to spare Nai Nai, beneath the surface is the current sadness for those in the family who have struck out on their own. 12