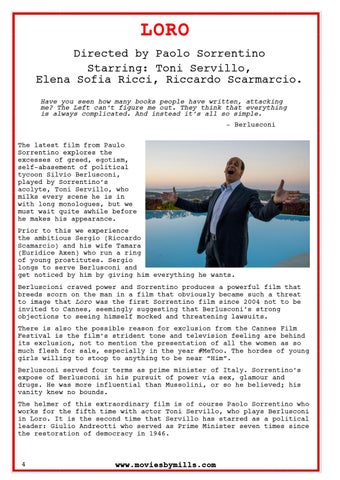 LORO Directed by Paolo Sorrentino Starring: Toni Servillo, Elena Sofia Ricci, Riccardo Scarmarcio. Have you seen how many books people have written, attacking me? The Left can’t figure me out. They think that everything is always complicated. And instead it’s all so simple. - Berlusconi The latest film from Paulo Sorrentino explores the excesses of greed, egotism, self-abasement of political tycoon Silvio Berlusconi, played by Sorrentino’s acolyte, Toni Servillo, who milks every scene he is in with long monologues, but we must wait quite awhile before he makes his appearance. Prior to this we experience the ambitious Sergio (Riccardo Scamarcio) and his wife Tamara (Euridice Axen) who run a ring of young prostitutes. Sergio longs to serve Berlusconi and get noticed by him by giving him everything he wants. Berluscioni craved power and Sorrentino produces a powerful film that breeds scorn on the man in a film that obviously became such a threat to image that Loro was the first Sorrentino film since 2004 not to be invited to Cannes, seemingly suggesting that Berlusconi’s strong objections to seeing himself mocked and threatening lawsuits. There is also the possible reason for exclusion from the Cannes Film Festival is the film’s strident tone and television feeling are behind its exclusion, not to mention the presentation of all the women as so much flesh for sale, especially in the year #MeToo. The hordes of young girls willing to stoop to anything to be near “Him”. Berlusconi served four terms as prime minister of Italy. Sorrentino’s expose of Berlusconi in his pursuit of power via sex, glamour and drugs. He was more influential than Mussolini, or so he believed; his vanity knew no bounds. The helmer of this extraordinary film is of course Paolo Sorrentino who works for the fifth time with actor Toni Servillo, who plays Berlusconi in Loro. It is the second time that Servillo has starred as a political leader: Giulio Andreotti who served as Prime Minister seven times since the restoration of democracy in 1946.