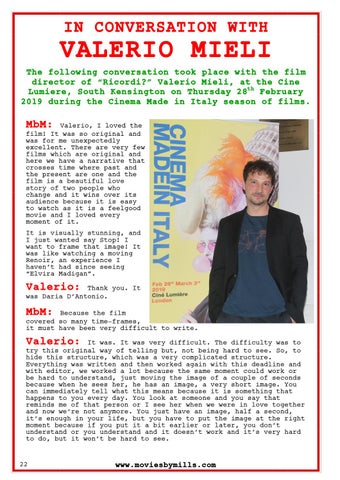 VALERIO MIELI The following conversation took place with the film director of “Ricordi?” Valerio Mieli, at the Cine Lumiere, South Kensington on Thursday 28th February 2019 during the Cinema Made in Italy season of films.

Valerio, I loved the film! It was so original and was for me unexpectedly excellent. There are very few films which are original and here we have a narrative that crosses time where past and the present are one and the film is a beautiful love story of two people who change and it wins over its audience because it is easy to watch as it is a feelgood movie and I loved every moment of it. It is visually stunning, and I just wanted say Stop! I want to frame that image! It was like watching a moving Renoir, an experience I haven’t had since seeing “Elvira Madigan”.

Thank you. It was Daria D’Antonio.

Because the film covered so many time-frames, it must have been very difficult to write.

It was. It was very difficult. The difficulty was to try this original way of telling but, not being hard to see. So, to hide this structure, which was a very complicated structure. Everything was written and then worked again with this deadline and with editor, we worked a lot because the same moment could work or be hard to understand, just moving the image of a couple of seconds because when he sees her, he has an image, a very short image. You can immediately tell what this means because it is something that happens to you every day. You look at someone and you say that reminds me of that person or I see her when we were in love together and now we’re not anymore. You just have an image, half a second, it’s enough in your life, but you have to put the image at the right moment because if you put it a bit earlier or later, you don’t understand or you understand and it doesn’t work and it’s very hard to do, but it won’t be hard to see.