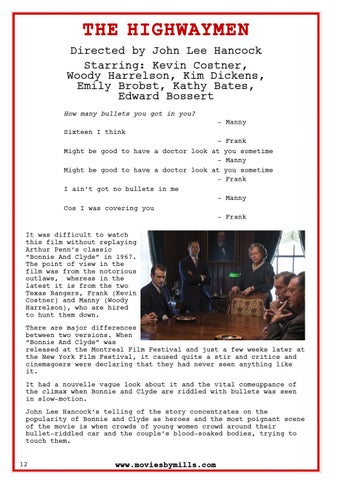 It was difficult to watch this film without replaying Arthur Penn’s classic “Bonnie And Clyde” in 1967. The point of view in the film was from the notorious outlaws, whereas in the latest it is from the two Texas Rangers, Frank (Kevin Costner) and Manny (Woody Harrelson), who are hired to hunt them down. There are major differences between two versions. When “Bonnie And Clyde” was released at the Montreal Film Festival and just a few weeks later at the New York Film Festival, it caused quite a stir and critics and cinemagoers were declaring that they had never seen anything like it. It had a nouvelle vague look about it and the vital comeuppance of the climax when Bonnie and Clyde are riddled with bullets was seen in slow-motion. John Lee Hancock’s telling of the story concentrates on the popularity of Bonnie and Clyde as heroes and the most poignant scene of the movie is when crowds of young women crowd around their bullet-riddled car and the couple’s blood-soaked bodies, trying to touch them.