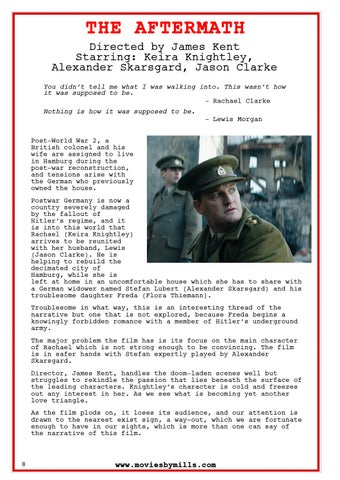 Post-World War 2, a British colonel and his wife are assigned to live in Hamburg during the post-war reconstruction, and tensions arise with the German who previously owned the house. Postwar Germany is now a country severely damaged by the fallout of Hitler’s regime, and it is into this world that Rachael (Keira Knightley) arrives to be reunited with her husband, Lewis (Jason Clarke). He is helping to rebuild the decimated city of Hamburg, while she is left at home in an uncomfortable house which she has to share with a German widower named Stefan Lubert (Alexander Skarsgard) and his troublesome daughter Freda (Flora Thiemann). Troublesome in what way, this is an interesting thread of the narrative but one that is not explored, because Freda begins a knowingly forbidden romance with a member of Hitler’s underground army.

The major problem the film has is its focus on the main character of Rachael which is not strong enough to be convincing. The film is in safer hands with Stefan expertly played by Alexander Skarsgard. Director, James Kent, handles the doom-laden scenes well but struggles to rekindle the passion that lies beneath the surface of the leading characters. Knightley’s character is cold and freezes out any interest in her. As we see what is becoming yet another love triangle. As the film plods on, it loses its audience, and our attention is drawn to the nearest exist sign, a way-out, which we are fortunate enough to have in our sights, which is more than one can say of the narrative of this film.