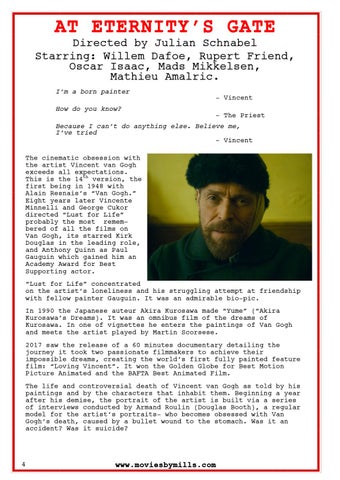 AT ETERNITY’S GATE Directed by Julian Schnabel Starring: Willem Dafoe, Rupert Friend, Oscar Isaac, Mads Mikkelsen, Mathieu Amalric. I’m a born painter - Vincent How do you know? - The Priest Because I can’t do anything else. Believe me, I’ve tried - Vincent The cinematic obsession with the artist Vincent van Gogh exceeds all expectations. This is the 14th version, the first being in 1948 with Alain Resnais’s “Van Gogh.” Eight years later Vincente Minnelli and George Cukor directed “Lust for Life” probably the most remembered of all the films on Van Gogh, its starred Kirk Douglas in the leading role, and Anthony Quinn as Paul Gauguin which gained him an Academy Award for Best Supporting actor. “Lust for Life” concentrated on the artist’s loneliness and his struggling attempt at friendship with fellow painter Gauguin. It was an admirable bio-pic. In 1990 the Japanese auteur Akira Kurosawa made “Yume” (“Akira Kurosawa’s Dreams). It was an omnibus film of the dreams of Kurosawa. In one of vignettes he enters the paintings of Van Gogh and meets the artist played by Martin Scorsese. 2017 saw the release of a 60 minutes documentary detailing the journey it took two passionate filmmakers to achieve their impossible dreams, creating the world’s first fully painted feature film: “Loving Vincent”. It won the Golden Globe for Best Motion Picture Animated and the BAFTA Best Animated Film. The life and controversial death of Vincent van Gogh as told by his paintings and by the characters that inhabit them. Beginning a year after his demise, the portrait of the artist is built via a series of interviews conducted by Armand Roulin (Douglas Booth), a regular model for the artist’s portraits- who becomes obsessed with Van Gogh’s death, caused by a bullet wound to the stomach. Was it an accident? Was it suicide?