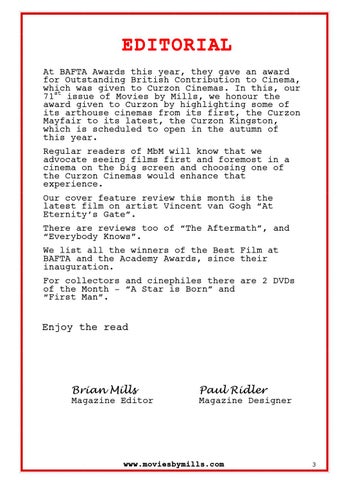 EDITORIAL At BAFTA Awards this year, they gave an award for Outstanding British Contribution to Cinema, which was given to Curzon Cinemas. In this, our st 71 issue of Movies by Mills, we honour the award given to Curzon by highlighting some of its arthouse cinemas from its first, the Curzon Mayfair to its latest, the Curzon Kingston, which is scheduled to open in the autumn of this year. Regular readers of MbM will know that we advocate seeing films first and foremost in a cinema on the big screen and choosing one of the Curzon Cinemas would enhance that experience. Our cover feature review this month is the latest film on artist Vincent van Gogh “At Eternity’s Gate”. There are reviews too of “The Aftermath”, and “Everybody Knows”. We list all the winners of the Best Film at BAFTA and the Academy Awards, since their inauguration. For collectors and cinephiles there are 2 DVDs of the Month – “A Star is Born” and “First Man”.