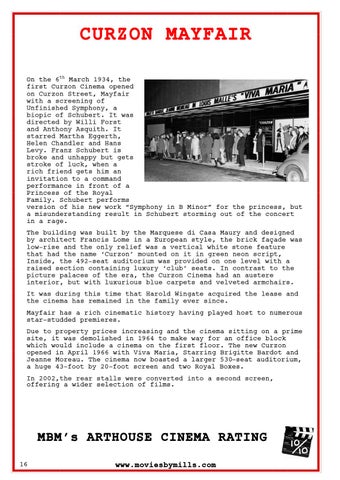 CURZON MAYFAIR On the 6th March 1934, the first Curzon Cinema opened on Curzon Street, Mayfair with a screening of Unfinished Symphony, a biopic of Schubert. It was directed by Willi Forst and Anthony Asquith. It starred Martha Eggerth, Helen Chandler and Hans Levy. Franz Schubert is broke and unhappy but gets stroke of luck, when a rich friend gets him an invitation to a command performance in front of a Princess of the Royal Family. Schubert performs version of his new work “Symphony in B Minor” for the princess, but a misunderstanding result in Schubert storming out of the concert in a rage. The building was built by the Marquese di Casa Maury and designed by architect Francis Lome in a European style, the brick façade was low-rise and the only relief was a vertical white stone feature that had the name ‘Curzon’ mounted on it in green neon script, Inside, the 492-seat auditorium was provided on one level with a raised section containing luxury ‘club’ seats. In contrast to the picture palaces of the era, the Curzon Cinema had an austere interior, but with luxurious blue carpets and velveted armchairs. It was during this time that Harold Wingate acquired the lease and the cinema has remained in the family ever since. Mayfair has a rich cinematic history having played host to numerous star-studded premieres. Due to property prices increasing and the cinema sitting on a prime site, it was demolished in 1964 to make way for an office block which would include a cinema on the first floor. The new Curzon opened in April 1966 with Viva Maria, Starring Brigitte Bardot and Jeanne Moreau. The cinema now boasted a larger 530-seat auditorium, a huge 43-foot by 20-foot screen and two Royal Boxes. In 2002,the rear stalls were converted into a second screen, offering a wider selection of films.