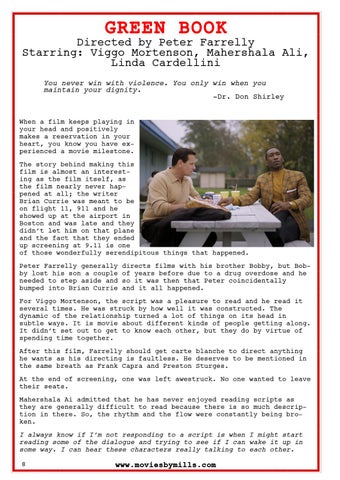 When a film keeps playing in your head and positively makes a reservation in your heart, you know you have experienced a movie milestone. The story behind making this film is almost an interesting as the film itself, as the film nearly never happened at all; the writer Brian Currie was meant to be on flight 11, 911 and he showed up at the airport in Boston and was late and they didn’t let him on that plane and the fact that they ended up screening at 9.11 is one of those wonderfully serendipitous things that happened. Peter Farrelly generally by lost his son a couple needed to step aside and bumped into Brian Currie

directs films with his brother Bobby, but Bobof years before due to a drug overdose and he so it was then that Peter coincidentally and it all happened.

For Viggo Mortenson, the script was a pleasure to read and he read it several times. He was struck by how well it was constructed. The dynamic of the relationship turned a lot of things on its head in subtle ways. It is movie about different kinds of people getting along. It didn’t set out to get to know each other, but they do by virtue of spending time together. After this film, Farrelly should get carte blanche to direct anything he wants as his directing is faultless. He deserves to be mentioned in the same breath as Frank Capra and Preston Sturges. At the end of screening, one was left awestruck. No one wanted to leave their seats. Mahershala Ai admitted that he has never enjoyed reading scripts as they are generally difficult to read because there is so much description in there. So, the rhythm and the flow were constantly being broken. I always know if I’m not responding to a script is when I might start reading some of the dialogue and trying to see if I can wake it up in some way. I can hear these characters really talking to each other. 8