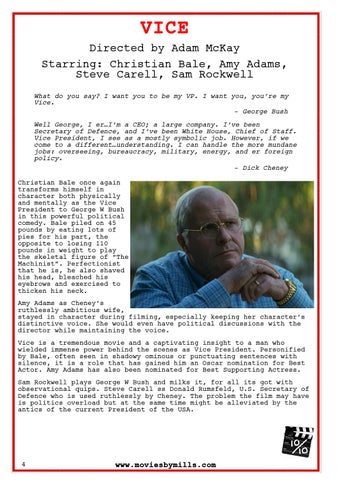 VICE Directed by Adam McKay Starring: Christian Bale, Amy Adams, Steve Carell, Sam Rockwell What do you say? I want you to be my VP. I want you, you’re my Vice. - George Bush Well George, I er…I’m a CEO; a large company. I’ve been Secretary of Defence, and I’ve been White House, Chief of Staff. Vice President, I see as a mostly symbolic job. However, if we come to a different…understanding. I can handle the more mundane jobs: overseeing, bureaucracy, military, energy, and er foreign policy. - Dick Cheney Christian Bale once again transforms himself in character both physically and mentally as the Vice President to George W Bush in this powerful political comedy. Bale piled on 45 pounds by eating lots of pies for his part, the opposite to losing 110 pounds in weight to play the skeletal figure of “The Machinist”. Perfectionist that he is, he also shaved his head, bleached his eyebrows and exercised to thicken his neck. Amy Adams as Cheney’s ruthlessly ambitious wife, stayed in character during filming, especially keeping her character’s distinctive voice. She would even have political discussions with the director while maintaining the voice.

Vice is a tremendous movie and a captivating insight to a man who wielded immense power behind the scenes as Vice President. Personified by Bale, often seen in shadowy ominous or punctuating sentences with silence, it is a role that has gained him an Oscar nomination for Best Actor. Amy Adams has also been nominated for Best Supporting Actress. Sam Rockwell plays George W Bush and milks it, for all its got with observational quips. Steve Carell ss Donald Rumsfeld, U.S. Secretary of Defence who is used ruthlessly by Cheney. The problem the film may have is politics overload but at the same time might be alleviated by the antics of the current President of the USA.