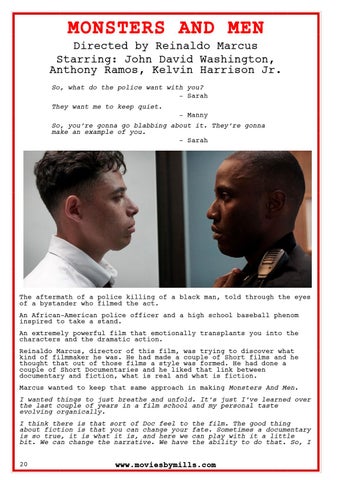 MONSTERS AND MEN Directed by Reinaldo Marcus Starring: John David Washington, Anthony Ramos, Kelvin Harrison Jr. So, what do the police want with you? - Sarah They want me to keep quiet. - Manny So, you’re gonna go blabbing about it. They’re gonna make an example of you. - Sarah

The aftermath of a police killing of a black man, told through the eyes of a bystander who filmed the act. An African-American police officer and a high school baseball phenom inspired to take a stand. An extremely powerful film that emotionally transplants you into the characters and the dramatic action. Reinaldo Marcus, director of this film, was trying to discover what kind of filmmaker he was. He had made a couple of Short films and he thought that out of those films a style was formed. He had done a couple of Short Documentaries and he liked that link between documentary and fiction, what is real and what is fiction. Marcus wanted to keep that same approach in making Monsters And Men. I wanted things to just breathe and unfold. It’s just I’ve learned over the last couple of years in a film school and my personal taste evolving organically. I think there is that sort of Doc feel to about fiction is that you can change your is so true, it is what it is, and here we bit. We can change the narrative. We have 20

the film. The good thing fate. Sometimes a documentary can play with it a little the ability to do that. So, I