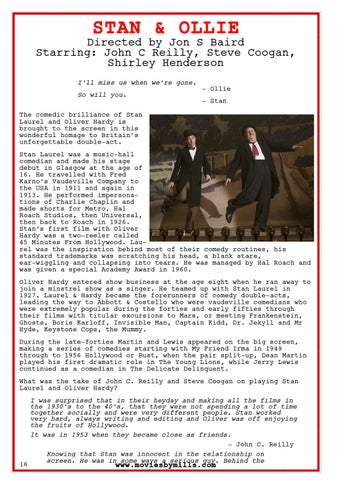 The comedic brilliance of Stan Laurel and Oliver Hardy is brought to the screen in this wonderful homage to Britain’s unforgettable double-act. Stan Laurel was a music-hall comedian and made his stage debut in Glasgow at the age of 16. He travelled with Fred Karno’s Vaudeville Company to the USA in 1911 and again in 1913. He performed impersonations of Charlie Chaplin and made shorts for Metro, Hal Roach Studios, then Universal, then back to Roach in 1926. Stan’s first film with Oliver Hardy was a two-reeler called 45 Minutes From Hollywood. Laurel was the inspiration behind most of their comedy routines, his standard trademarks was scratching his head, a blank stare, ear-wiggling and collapsing into tears. He was managed by Hal Roach and was given a special Academy Award in 1960. Oliver Hardy entered show business at the age eight when he ran away to join a minstrel show as a singer. He teamed up with Stan Laurel in 1927. Laurel & Hardy became the forerunners of comedy double-acts, leading the way to Abbott & Costello who were vaudeville comedians who were extremely popular during the forties and early fifties through their films with titular excursions to Mars, or meeting Frankenstein, Ghosts, Boris Karloff, Invisible Man, Captain Kidd, Dr. Jekyll and Mr Hyde, Keystone Cops, the Mummy.

During the late-forties Martin and Lewis appeared on the big screen, making a series of comedies starting with My Friend Irma in 1949 through to 1956 Hollywood or Bust, when the pair split-up, Dean Martin played his first dramatic role in The Young Lions, while Jerry Lewis continued as a comedian in The Delicate Delinquent. What was the take of John C. Reilly and Steve Coogan on playing Stan Laurel and Oliver Hardy?

I was surprised that in their heyday and making all the films in the 1930’s to the 40’s, that they were not spending a lot of time together socially and were very different people. Stan worked very hard, always writing and editing and Oliver was off enjoying the fruits of Hollywood. It was in 1953 when they became close as friends. - John C. Reilly Knowing that Stan was innocent in the relationship on screen. He was in some ways a serious guy. Behind the